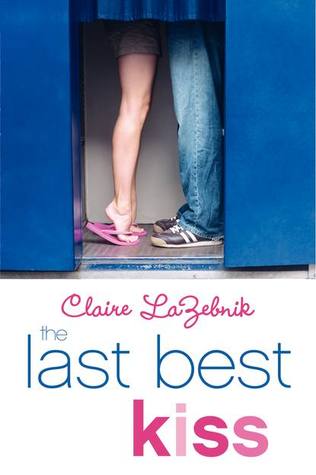 Anna Eliot is tired of worrying about what other people think. After all, that was how she lost the only guy she ever really liked, Finn Westbrook.

Now, three years after she broke his heart, the one who got away is back in her life.

All Anna wants is a chance to relive their last kiss again (and again and again). But Finn obviously hasn’t forgotten how she treated him, and he’s made it clear he has no interest in having anything to do with her.

Anna keeps trying to persuade herself that she doesn’t care about Finn either, but even though they’ve both changed since they first met, deep down she knows he’s the guy for her. Now if only she can get him to believe that, too….

The Last Best Kiss isn’t my first book by Claire LaZebnik – I read Epic Fail quite a while back and loved it at the time. It was a cute, fluffy, pick-me-up sort of read: nothing too serious, but a good way to pass the time nevertheless. Looking back, The Last Best Kiss does do some things better than Epic Fail, but I’m also a very different sort of reader now, so here we are.

The Last Best Kiss isn’t anything outrageous or new. It’s a story of “the one that got away,” and a girl hoping for a second chance, a second shot at something that could’ve been. Anna and her friends are a tad too superficial and a bit too much the generic high-school friend group for my liking, but her realization that she screwed up is an all-too-common feeling, and her looking to right her wrongs isn’t a foreign concept – while maybe not be about a guy, the basic sentiment is a pretty universal one, and it makes the story and Anna herself easy to follow and root for. Having never read Jane Austen’s Persuasion, I can’t say much about how well this works as a retelling, but as far as plot, The Last Best Kiss does a pretty solid job of depicting the usual YA romance high school. The story’s accompanied by an equally generic cast of characters, given enough depth and emotion to lull them to life across the pages, but hardly enough to break them from their cookie-cutter stereotypes. I do have to just point out, though, that I’d never get along with Anna’s dad. Ever.

Claire LaZebnik’s books give me the same feeling Sarah Dessen’s does. They aren’t terribly exciting, and once you’ve read one you can pretty much predict and map out the rest, but they’re the kind of feel-good reads you find yourself craving every once in a while. You know what to expect, you know how it’s going to end, and when it comes, everything’s neatly tied up and handed to you with a bow, and you leave with a fluffy, quiet sort of satisfaction.

So, really, there isn’t a lot to say. The Last Best Kiss is very normal and predictable, but it works for the story. It’s fluffy and sweet, with a splash of the author’s “signature wit and expertly authentic teen voice” as the synopsis proudly declares (it isn’t wrong, but just not as prominent as you’d expect). I quite recommend it as a library read, a one-time sort of thing for an hour or so of enjoyment, and a little breath between heavier reads.