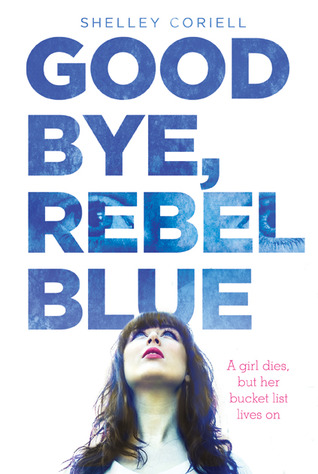 Rebecca Blue is a rebel with an attitude whose life is changed by a chance encounter with a soon-to-be dead girl. Rebel (as she’s known) decides to complete the dead girl’s bucket list to prove that choice, not chance, controls her fate. In doing so, she unexpectedly opens her mind and heart to a world she once dismissed—a world of friendships, family, and faith. With a shaken sense of self, she must reevaluate her loner philosophy—particularly when she falls for Nate, the golden boy do-gooder who never looks out for himself.

I was so, so excited when I got my hands on a copy of Goodbye, Rebel Blue! Shelly Coriell’s debut novel, Welcome, Caller, This is Chloe was such a great read; I really loved how the author had balanced more serious topics with witty narrative and good humor, and was hoping for the same in Goodbye, Rebel Blue, too, and the bucket list synopsis seemed too good to pass up. I’m happy to say that Goodbye, Rebel Blue doesn’t disappoint.

Goodbye, Rebel Blue isn’t an original book by any stretch. The whole tough-girl-falls-for-golden-boy idea’s been done countless times, as had the bucket-list idea. However, the author writes it in such a way that doesn’t make you feel like you’re reading the same old story again, but rather something new and different.

The plot was slow, and while often times that’s a reason for me to put the book down, I think I kind of liked it here. It was slow, as Rebel fumbled around – for the lack of a better, not-so-cheesy word – “discovering” herself. She’s stumbling along, screwing up and doing the best she can to fulfil a dead girl’s bucket list, the plot stumbles along with her, and in a situation like this, I found that I didn’t mind the pacing at all.

Not gonna lie – one of my favorite parts of the book was the pieces of Rebel’s personal bucket list at the beginnings of every chapter (especially number 20 – “learn math”). It really showed who she was as a person: quirky and sarcastic, but also, underneath it all, lonely (aren’t we all at least a little though? Or maybe I’m looking too much into #22?). Her voice was what stood out to me the most in Goodbye, Rebel Blue.

The secondary characters were, I felt, all there for a reason, which was awesome, though I’m having trouble remembering all their names now (more on that later). They all did their part in helping the story along, and all had a part in Rebel’s change of character from the beginning to the end. I think the most impacting part for me though was when everything started crumbling for Rebel, and then she goes to Nate’s and HIS SISTER WITH THE HAIR DYE AND HOW MUCH SHE TRIED TO BE LIKE REBEL AND WHEN SHE FAILED SHE WAS SO DISAPPOINTED AND HEARTBROKEN and oh my goodness my heart. That was probably my favorite scene in a feeling-killing sort of way.

The only shortcoming that Goodbye, Rebel Blue had for me was it’s failure to really leave a lasting impression beyond the pages. Like I stated earlier, I’m having trouble remembering most of the secondary characters’ names, as well as the love interest’s name (I had to look it up; it’s Nate). While reading, I liked how the romance wasn’t all in-your-face but rather a “side dish” to the story, but afterwards, it just kind of fades away. Rebel’s friendship with Macey (so many pies!), too, which I remember really liking while reading, I can’t really seem to recall anymore. My point being that, while Goodbye, Rebel Blue was a wonderful, fun, and emotional read, it isn’t really that much of a memorable one, which is rather sad.

But all in all, it was a great read. If you loved the author’s first book, Welcome, Caller, This is Chloe, you should definitely give Goodbye, Rebel Blue a try, and vice versa. And if you haven’t read any of her books, I definitely recommend fans of the genre to give them a try.