Princess of Thorns by Stacey Jay 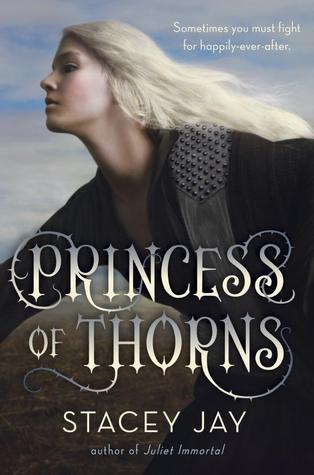 Though she looks like a mere mortal, Princess Aurora is a fairy blessed with enhanced strength, bravery, and mercy yet cursed to destroy the free will of any male who kisses her. Disguised as a boy, she enlists the help of the handsome but also cursed Prince Niklaas to fight legions of evil and free her brother from the ogre queen who stole Aurora’s throne ten years ago.

Will Aurora triumph over evil and reach her brother before it’s too late? Can Aurora and Niklaas break the curses that will otherwise forever keep them from finding their one true love?

(Gonna get this off my chest real quick: it’s on the first page or so, but Sleeping Beauty’s prince was already married?‌ UGH.)

The first third of Princess of Thorns was pretty solid. The character’s were fun, it wasn’t… quite like the synopsis – more like a high fantasy that had borrowed names from famous fairytales – but a good read just the same. The latter section, though, is where the cracks start to show, and everything starts to unravel.

Niklaas was kind of. Eh? Upon first their first meeting, but it was nice to see his character change. Actually, both he and Aurora are pretty bratty and lofty and cocky at times, but I‌ liked their easy exchanges, so it didn’t bother me in the slightest.

Rather, the world-building – or rather the lack of world–building bothered me the most. So there are. An enchanted circle of briars?‌ And fairies. And ogres. And another world? And something about magic-born children and briar-born children and portals to other worlds with ogre mothers in them, but it’s never quite explained, only glossed over in a very you’ll-understand-eventually sort of way that I‌ never quite understood. Ditto for Niklaas and Aurora’s curses. And their families. (Also, on the subject of things I don’t understand, Aurora doesn’t quite so much “dress up” as a guy upon first meeting Niklaas as she does “get mistaken for” a guy and I‌ still really don’t understand how that can happen when we see him emoting over her beautiful face and curves and whatnot later on?)

And, while we’re talking about Aurora and Niklaas, Aurora-and-Niklaas: the romance was kind of strange? They had really easy-going friendship vibes going on, and then Niklaas found out Aurora was a girl, and then suddenly Aurora was wondering if she had ~feelings~ for Niklaas. I’d understand the way he treated her changed after the realization – and was actually pretty surprised and found it a little strange that it hadn’t changed that much – but this slam-dunk into romance read awkwardly. The last part of the book literally books it (ha!) from best-bros to full-blown-romance with no development or progression in between.

Speaking of things that don’t exist – the stakes. It was fun to follow Aurora and Niklaas’s trip in the first half or so of the book. But her brother’s in prison, and we’re told that there are Big Bad Ogre Plans that’ll end the world. So, the stakes should be pretty high, and there should be a lot of tension and urgency, but the execution’s pretty easy-going? A lot of things just fall into place. Crimsin, the girl at the inn, for one, virtually just shows up and glosses them over a tight spot. Even the ending doesn’t seem that climactic because of the ~exciting twist~ and even Aurora at the end wasn’t really sure what happened but just ran with it.