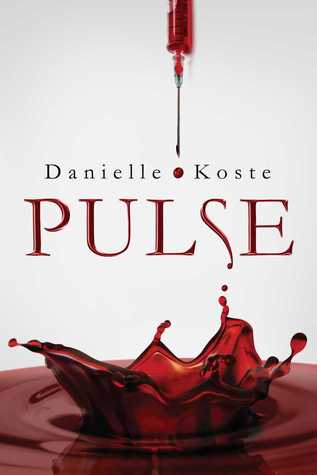 Rowan Platts is addicted to success.

When she’s presented with the chance to work on a top secret project fronted by her idol, renowned virologist Dr. Margot Miller, Rowan signs her life away without second thought. The realization she’s gotten in over her head comes only after the subject of their study is revealed: a boy with a bad attitude and an uninhibited taste for human blood.

He’s a medical anomaly. Having the ability to crush metal with his bare hands and hear a heartbeat from across the room, it would make Rowan’s career if she was the one to discover what made him so unusual.

Easier said than done, with a subject who prefers snapping necks over answering questions.

So, IDC what they’re saying about vampires being an early 2000’s trend, over and done – give me a book about them and I’ll still read it happily. Enter, PULSE.

The premise was really cool! I really liked the idea of approaching the trope from a medical perspective, and appreciate the effort that went into setting up an overall atmosphere to match. But, while the writing didn’t hinder the story, and the set-up was interesting, the overall execution fell flat: it came off as a little lifeless and very pointed, littered with blatant tells that showed the author had a very specific idea in mind for this story, which isn’t in itself a bad thing, but when story elements are sacrificed to keep the story on a certain path, well, thats when things start to fall apart.

I‌ was in a scribbly sort of mood while reading PULSE and took notes, which I‌ do just about once every blue moon, so, brace yourself? And, if you’re in a long-rambling-review-reading sort of mood – let me explain.

I really liked Rowan at the start! Particularly, the unabashed way she strove for success; it was bold and driven in a way that I‌ found nothing short of admiring. It colors the way she sees a lot of things, like her very specific perception of Miller, because of it. Our introduction to her paints her as tenacious, hints at a morally questionable side, and sets the stakes.

But then Rowan meets Lyall, the story rEALLY starts, and that is when things start going a little awry.

Rowan comes off as driven for success, might I‌ say slightly manipulative, and with an almost callously selective moral compass at the beginning. But then, when we get to the talk about her reasons for wanting to break Lyall out, it seems to go against everything we’ve been suggested and everything that’s been established about her character. The complete 180 in her approach to the laboratory happenings might’ve been more fitting and less jarring had there been some sort of catalyst to her change of mind, something to force her to reflect, but that’s the thing – there is none. In the bigger picture, sure, there’s all her interactions with Lyall, but throughout the story, they’ve never affected Rowan herself so much as they’ve affected her perceptions of other people, if that makes sense? Rowan’s character is inconsistent, propped up by a suggested ideal by the author at the beginning, and then taken apart to suit the direction of the story as the plot progresses.

(And, the characters keep floating this idea that Rowen’s like Miller, but I‌ don’t see it at all? Rowan is an inconsistent plot-aid, and Miller is a one-dimensional villain.)

Rowan’s also prone to making unprompted leaps in logic, especially from single-instance observations. It’s the first thing you’re told when you set foot in lab – everything and anything you assert needs to be backed up, or someone’s going to come at your work with a pen, or a laptop, and tear you apart in 10000 characters or less. Okay, so maybe that last part applies strictly to my university’s internal system, but the sentiment still stands: no professor’s just going to… take your word for it, at face level – “I trust the look in your eyes” – a sentence or two without examining the evidence or without further discussion. At best, it’ll be “your hypothesis seems promising – let’s go.”

This review’s getting longer and longer, so cue: some more lab-related inconsistencies, rapid-fire.
> The insistence to wrap up Lyall’s vampirism in a Wikipedia-article conversation about hemoglobin, cringiness aside, is stark and confusing when held up to the writing’s later insistence on various descriptions of “the monster within.”
> Rowan and Lyall’s important conversations that took place within the lab, despite him being a literal test subject, just magically happen to not be recorded?
> No one in the lab cares about the actual LIVE SPECIMEN when they have… limited numbers? They’re all just. Willing to give up the live specimen? Because of a small set of numbers and the possibility of recreating him in the uncertain future? Thats. That’s not how any of this works?????
> No one calls Lyall a vampire – which is kind of weird, that they stumble across this super speedy and super strong guy who needs blood to survive and falls apart with blood thirst, and no one, not one of them, mentions anything about vampires? Like if some hat my lab was examining started talking and telling me I was a Slytherin, I’d be like what the fuck is that the sorting hat? Lets put all our cards on the table: a vampire is exactly what he is.

While we’re on the topic of weird jumps, they’ve literally been doing the same thing to Lyall for chapters, but suddenly halfway through Rowan decides to feel bothered by it and?‌ What changed??? (I’ll answer that rhetorical question nothing did; the entire story operates under a static set of stakes, but at choice points beneficial to the plot, the characters themselves suddenly decide that they’re going to start doing things differently.)‌ SO‌ THEN when Miller. Finally. Starts to feel off to Rowan, it’s nothing that Miller hasn’t done or said before. The scene’s literally just Miller being Miller, for the 100th+ page in a row, but somehow this?‌is the straw that broke the camel’s back? Rowan’s even helped and stood by Miller, her self-professed idol, against Phelps, her kindly mentor-professor-boss, before, in the face of arguably more blatantly Bad words and actions, but somehow it’s This Particular Scene that does it in for Rowan, and we have hardly any prompts as to why.

Lyall’s also a mess, characterization-wise. He’s a caricature to suit Rowan’s development and the story’s progression; his moods always reflect the best (and most predictable) way to move the plot forward – not necessarily contained to Lyall, the character. Case in point: his change of heart at the end. I’m doing my best to keep this review spoiler-free, so I’ll just say that, like a lot of things I’ve pointed out, there’s absolutely zero build-up and lead-in. Also, his entire relationship with Rowan.

So, honestly, thank fuck for Cameron, often the sole voice of reason, and also the one who finally asked “what makes alien boy so special?” because – add that to the list! – I have no clue.

And then, more specific things:

In the vein of not being very self-aware, the narration doesn’t always seem to follow Rowan, despite the chosen POV. I.e. when Rowan realizes that she’s in over her head, there’s a place in the narration that conveys this, and then the character directly conveys it again, a little while later, and it’s these little disconnects that makes the writing feel a little off, a little hard to get into.

Also, the dialogue feels stilted at times. Many conversations in PULSE don’t quite flow so much as they… jump?‌ From one thing to another, seemingly purposefully, because there’s always some big line, some big idea at the end that needs delivering, even if the conversation doesn’t start quite at the right point to deliver it. Certain lines like, for example, “Morality is the disease, and I’m the cure” – just by looking at it, written out here, you can see the proud jazz-hands flashing-neon-lights looky-looky-here but in-text, it lacks impact because it lacks the buildup and proper conversation placement.

So, PULSE. The premise was cool, but the execution was less than idea.